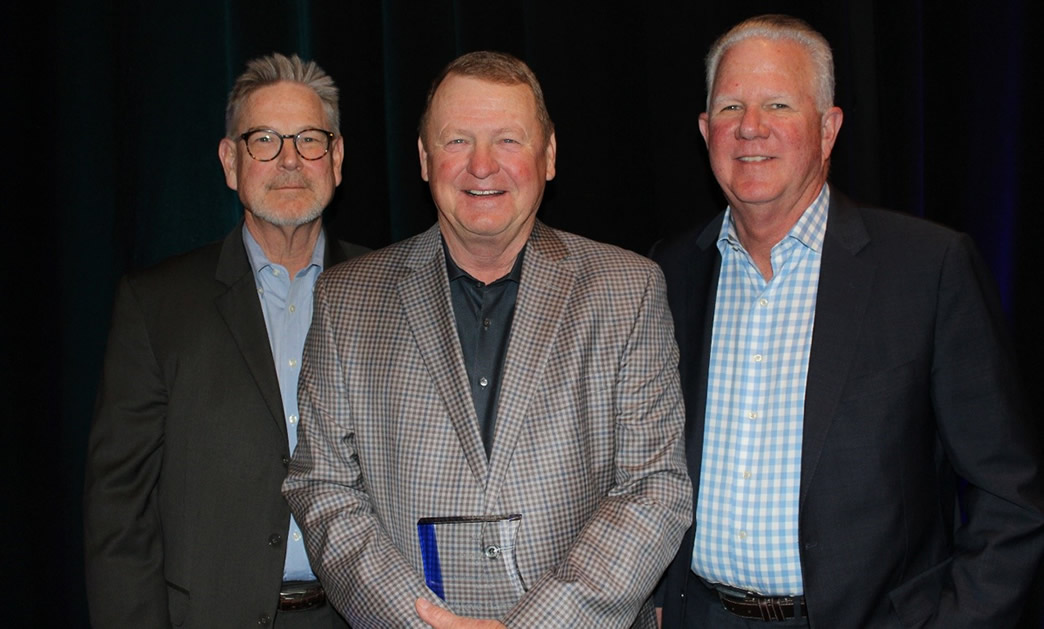 Steve was born and proudly raised in Sumner, Iowa. He graduated from Sumner High School and attended Upper Iowa University in Fayette, Iowa, where he played football and studied. He graduated in 1973 with a Bachelor’s of Science degree and taught high school biology and coached various sports in Grinnell, Iowa, and officiated basketball games at the high school and college level.

Cal Harms, Steve’s father who sold crop insurance for over 30 years at his agency in Sumner, suggested that he might consider working as an independent crop adjuster for Rain and Hail during the summer months. Thus, in 1973, Steve began his long association with Rain and Hail. In 1976, Rain and Hail’s former President, Bill Classen, traveled to Grinnell to interview Steve and the meeting concluded with an offer to join the company as a full-time Field Supervisor, which he promptly accepted.

Steve developed many trusted relationships with the crop insurance agents in his territory and across Iowa, and in 1979, was promoted to Assistant Manager of Rain and Hail’s Midwest Division serving Iowa and Missouri. Steve’s work ethic and beaming personality ascended him quickly on a path into senior management. He held various positions involving every aspect of insurance operations including Multi-Peril Crop Insurance Coordinator (1984); Vice President and Division Manager of the Midwest Division (1987); Vice President, National Claims/Compliance Coordinator (1990); Senior Vice President (1991); and, Executive Vice President (1992).

During his service to Rain and Hail, Steve helped to guide the company from a small insurance bureau into a managing general agency and then to an insurance company intent on meeting the risk management needs of the American farmer. While his goal was never for the company to be the biggest agricultural insurer—only the best—his infectious leadership resulted in achieving both.

Steve’s influence extended beyond Rain and Hail as a proven leader within the agricultural insurance industry. He was a member of many industry-shaping committees and visionary groups during his time with Rain and Hail. He served as Chairman of both the National Crop Insurance Services (NCIS) (2009 – 2011) and American Association of Crop Insurers (AACI) (2006 – 2008). He also testified before Congress on the importance of Federal Crop Insurance and led efforts through many Federal Farm Bills to ensure a vibrant crop insurance safety net to protect America’s Farmers.

Through his years of service, Steve also served on several community organizations and boards, namely the Advisory Board of Bankers Trust Company and Upper Iowa University (2001 – Present). He and his wife, Diane, are strong supporters of Upper Iowa University through service and philanthropy in their efforts to give back to their alma mater.

While Steve devoted an extraordinary amount of his life to the insurance industry, U.S. agriculture, Rain and Hail policyholders, agents, adjusters, and employees, he also found time to help his wife of 40 years raise their five children and they are now enjoying their eight grandchildren. For those who know Steve, he has never had a bad day and always has a smile and word of encouragement for those he interacts with. That special gift of making those around him feel comfortable and important is a quality that has served him well throughout his insurance career and beyond.